It’s been a few months since my last post, and a lot has changed… I had just started a new job, I got a promotion, business stalled and I moved back to Pennsylvania. Of course it took a while for all that to happen, but you get the jist. So, here I am back in my home state and I decided to go take a look at some places I haven’t seen in a long time.

As a child I remember coming to Scranton to visit Nay Aug Park, at the time it had a zoo, museum and a section with rides. Over the years they shut down the rides, closed the zoo (reopened and closed again) and struggled to find a purpose for this land. Nay Aug sits between the city and Roaring Brook, where for years people would hike out to the gorge and swim and dive into the water. Several waterfalls line the brook and make for a beautiful spot to visit. The city has decided to construct hiking trails, overlooks and a pedestrian bridge along the brook and it’s falls and they have added walking/jogging trails in the park itself.

I was pleasantly surprised to see so many people making use of the park and it’s trails yesterday when I went for a visit. Even though it is sad to see the amusement area now gone and the zoo boarded up, they have done a great job at making the land enjoyable. Walking by the old zoo building I could still remember the smell, and the sounds of the animals echoing through the hall. As I looked at the new walking/jogging path that takes the place of the old amusement area I remembered the old wooden roller coaster and the bumper cars. I reminisced about the time I was riding the Scrambler with my sister and I almost fell out of the seat, that scared the crap out of me! 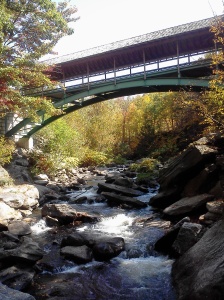 I decided to hike down to the gorge and the new (to me) Kanjorski Bridge. There are a few paths off of the main trail that take you right down to the brook, I took one down right under the bridge and sat out in the middle of the brook on some large rocks. Thinking to myself, “Who would have thought that I’d miss rocks?” Having been in Florida so long, I forgot how awe inspiring the large remnants of glaciers could be. As I sat and listened to the water rushing by, and smelled the autumn air…. looking out at the turning leaves, I pondered the shear mass of the rocks and the power it took to place them in these precarious positions. I thought to myself “It’s been a while… it’s good to be back.”

I then hiked the Davis Trail, which leads you along Roaring Brook and the train tracks. One of the branches of the trail takes you down right into the gorge, where again you are surrounded by huge boulders and rocky outcrops. Most of this section of the trail just uses a large boulder as a natural stairway. The trail then leads you out to one of old park entrance roads not far from the Everhart Museum.

One thought on “It’s Been a While…”

This site uses Akismet to reduce spam. Learn how your comment data is processed.